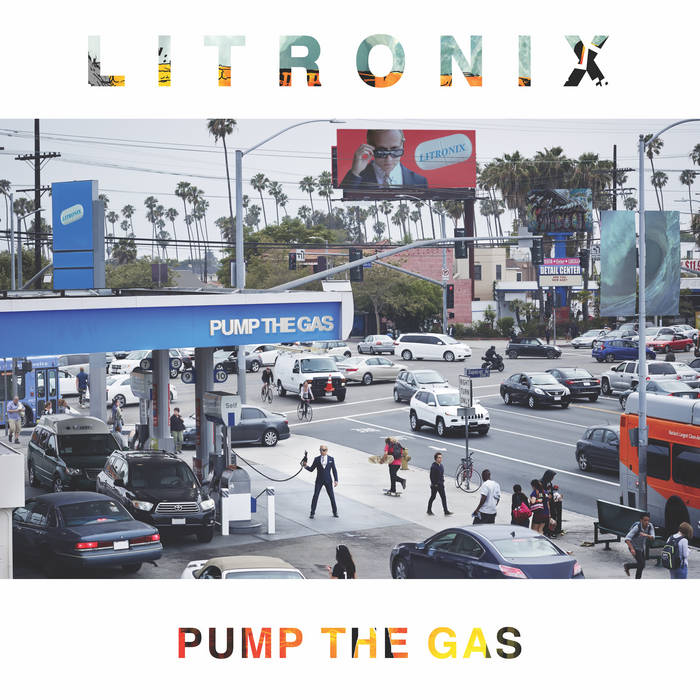 omahainfo This record is top notch psych synth pop brilliance. Slick production and witty lyrics propel Pump The Gas to the front of my playlist.
Favorite track: Hole In The Wall.

L.A. native Kevin Litrow's LITRONIX is a music machine inventing irresistible futuristic pop songs. He infuses warm analog electronic synthesizers, organic guitars, multi-layered loops, and boxed beats. In the studio, critically acclaimed SubPop artist Avi Buffalo stepped in as producer. They recorded and released the first single Are You New Age? as a seven inch, including a side-b remix by legendary electronic pioneer Sensations’ Fix. This summer, the long awaited debut full-length Pump The Gas is ready to be heard.

For 4 years, Kevin Litrow of Litronix was living above an apocalyptic Chevron gas station on a busy intersection in Venice Beach, California.

Kevin captured every moment and essence that the gas station had to offer. When asked about this monumental gas station, Kevin states:

"The Gas Station is a movie that never ends. People of all kinds come to the gas station to fill up and roll out. Always coming and going. Some people are local, most are not. Some are travelers, some are hookers, some are drug dealers, drinkers, homeless, supermodels, actors, tweekers, surfers, professionals, and some are survivors. The gas station is always moving. Except for me. I stay still. I live here. I watch the never-ending movie and take notes. And this album is what I came up with."

4 years in the making. Litronix takes you on an epic journey and adventure into his deepest un-filtered psyche that was inspired by the powerful energy living above this gas station.

One June 16th, which happens to be Kevin’s birthday, Porch Party Records will release Litronix’s debut album on white 12” vinyl and all digital formats.

“Litronix is Kevin Litrow, the longtime synthesizer visionary…the purest and clearest incarnation of his aesthetic yet. He’s got an upcoming album on Long Beach’s Porch Party Records (produced by Avi of Avi Buffalo) that matches Silver Apples’ synthscapes, Suicide’s pulsebeat and Broadcast’s electro-psychedelia to his own fearlessly expressive confessionals. Think of these as soul songs from an alternate universe—ballads by J.G. Ballard or Alfred Bester, with one man and his machines alone against the void."
-LA Record

Are You New Age?
7” Single Review
“Litronix, electro-cosmic visionary Kevin Litrow (Dance Disaster Movement, 60 Watt Kid, N.O.W.) and his co-pilot and producer Avi Buffalo. The gloriously rebuilt “Are You New Age?”, one of Litrow’s signature songs, is like Suicide’s Martin Rev and Talking Heads’ David Byrne on a last-ditch succeed-at-all-costs mission to save humanity from itself, with therapeutic synthesizers and lyrics that sound like one of those AI philosophers Philip K. Dick used to have people carry around in suitcases.”
-L.A. Record